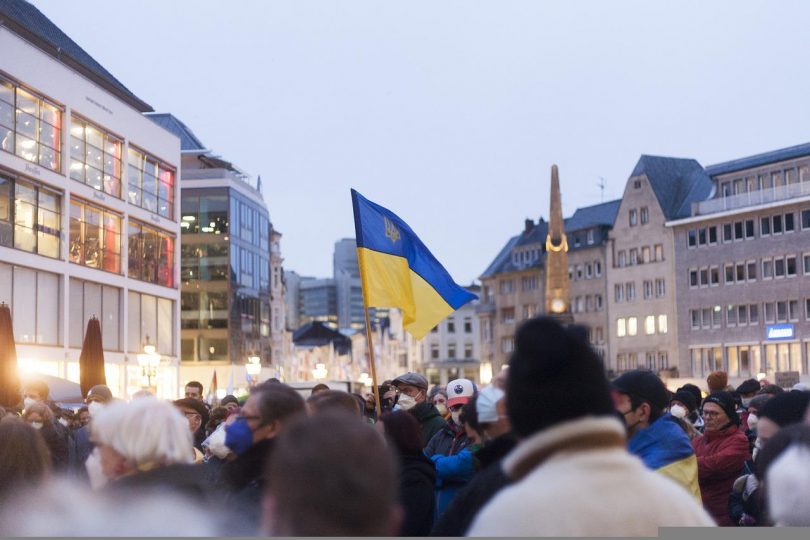 A GRAVITY SHIFT? Over the last week the Ukrainians have pulled off three successful tactical battles

They stopped the Russian Army encircling Kharkiv and then pushed them back until the city was beyond range for the Russian’s artillery. Far to the south another Russian attempt to encircle the city of Donetz came a cropper on the 11 May.  The rivers around Donetz are quite large and winding. They tend to channel tactical moves unless your engineers can throw a bridge across.  When attempting to establish a crossing point over the Severskyi Donetz River near Kreminna, a Russian battalion battle group got into serious trouble. The river flows from Russia and winds through Ukraine forming ox-bows, lakes and swamplands before returning into Russia. Its course makes any large military movement tricky. Reports and video in the media support the news story that elements of a mechanised infantry brigade were destroyed by the Ukrainian Airborne and supporting artillery. The Russian military engineers ( sappers ) were not trying to throw pontoon bridges across a river in their back areas but attempting, judging from the satellite or drone photos, what’s called an assault crossing – throwing bridges across the river while taking hostile fire. That’s challenging for the most battle hardened engineers led by experienced, capable and imaginative officers and NCOs.

Long, long ago I was a Royal Engineers officer and may I assure you the pictures reveal quite a lot. The river looks about 40 yards wide and the bank from which the pair of pontoon bridges were launched has an excellent gentle slope down to the water. The river current doesn’t look too strong either because there is no surface disturbance from the wrecked bridges which sank in the middle at a slight angle sideways. An ideal beach for sappers to work from and yet….how stupid can the man in charge be who put two bridges right beside each other and offered the Ukrainian gunners two prime targets for the price of one? Vehicles are bunched together on both sides of the river, many still smouldering. Their drivers/commanders made themselves easy targets. Perhaps there were mitigating circumstances for a pair of bridges so close to each other but common sense and basic tactical discipline look completely lacking.

You really wonder who is in overall command? And it’s more and more obvious that it’s not a professional military officer unless Russia’s generals learnt nothing in Afghanistan and the Near East. Which raises more questions – what are Russian officers taught and do any Russian NCOs exist to whom anyone else in the army listens? Or is the problem much higher up the pecking order?

Senior officers being killed for two reasons – dare I suggest – because they are being ordered to go forward and sort out situations but their military communications aren’t reliable so they’re using their own phones. Ukraine’s eavesdroppers don’t need NSA to spot the whereabouts of senior Russian officers!

Reports of widespread looting and raping and murdering tend to imply that officers either can’t keep control or do so through allowing their troops to behave like a plague of human locusts. The officer standard appears incredibly low or else orders come from the highest political levels based on ignorance of the real situation on the ground. That’s a very efficient way to kill off initiative, imagination, morale and thereby Russia’s army. However, gossip leaks suggest that none other than that modern Marshal Bagration, along with his defense chief, General Valery Gerasimov, wargame together with the battalion tactical groups. That does remind one of a certain Austrian with a moustache and lots of twitches. One cannot help wonder how much the pair meddled in the dispositions of forces and events leading up to the pontoon bridge disaster.

Those satellite or drone pictures of the sunken bridges and smoking tanks soon found their way into the world’s media.

The Institute for the Study of War ( ISW ) in Washington DC reports that the widespread circulation of air photos of two broken bridges sloping into the river and numerous smoking armoured vehicles on both banks prompted a flurry of blogs by Russia’s milbloggers – whose words are widely read. One is a former FSB officer who ‘ orchestrated ‘ the grabbing of the Crimea in 2014. Igor Girkin, sometimes known as Igor Strelkov, reckons that the campaign to grab Donbas has failed. Russian people trust their blog reports and opinions. Their followers number hundreds of thousands within Russia who read the questions and doubts raised by the milbloggers about the competence of those in charge of such a military disaster and whether the entire war is a national mistake.

The milbloggers are greatly excited about the impending negotiations over the conditional surrender at Mariupol. Some actually believe Putin’s version.

The Ukrainians took Ian Pannell of ABC News to see a refrigerated train they had found, full of body bags. Inside them were Russian soldiers that the Russian Army had not sent home, at least not so far. The implication is that the Russian government does not want the scale of the casualties known in Russia. This report is on You Tube but I don’t know how easy that is to access in Russia. Clearly some up to date news does get through and reaches the milbloggers – or they know how to find it – and what they write may change attitudes to the war among the Russian people.

Russian tactical groups are an odd cocktail – an infantry battalion supported by a whole battalion of artillery, though perhaps the mixture results in precisely the reverse? To this core pairing we must add what we call a squadron (and the Americans call a company) of tanks plus lighter armoured vehicles for scouting ahead. I would suggest that a Russian tactical group has not enough infantry or tanks to do either job properly. What might work on unarmed Syrian civilians may invite disaster when facing trained and determined Ukrainian airborne troops.  A British Army Independent Brigade Group during the Cold War would have been raised as armoured or infantry at a ratio of three or four to one. In other words three or even four infantry battalions supported by a tank regiment ( like a battalion ) plus a reconnaissance regiment and a gunner regiment. Added to the fighting units were the sappers, signals, medical and HQ staff. That’s a much more robust formation, able to take punishment and dish it out.

Moreover, there are reports that the Ukrainian artillery is having an impact on the Russian back areas including their attempts to build pontoon bridges. For anyone who hasn’t done the course at the Royal School of Military Engineering that’s a bridge that floats on boats. The boats, of course, have to be anchored in straight line and often at an angle to cope with the current. This job is tricky in rainy weather along the River Medway so one can imagine how difficult it becomes after heavy rain over the steppes followed by the Ukraine’s newly acquired medium artillery scything shrapnel through your engineers. Modern medium artillery will make the Russian logistic areas much more dangerous and uncomfortable. Unlike air strikes, artillery bombardments or H and I ( harassment and interdiction ) as we called it in Vietnam, goes on 24 hours a day. So simple tasks become highly dangerous as troops under fire play Russian roulette with their limbs and lives. Allow me to assure you it’s most unpleasant but a minefield is as bad if not worse!

One suspects that Russian ambitions are shrinking. They may still wish to encircle Donetsk but conclude that withdrawing further east is safer. According to the ISW some 2,500 reservists are training near Belgorod ( over the frontier in Russia ), Voronezh and Rostov but that’s not enough reinforcements to alter the tide of battle. A naval infantry brigade is receiving personnel from the Black Sea Fleet including ships’ crew members. The Times carries an analysis from Professor Michael Clarke that mentions 18,000 troops held ready in Belgorod.

Yet the Ukraine’s Air Force still operates above these eastern battlefields along with drones. Russian forces retreated from an occupied village after suffering losses from an air strike. Despite dreadful conditions and attacks with phosphorus weapons the defenders of Mariupol held out all last week. As mentioned above, since the weekend there appears to have been some kind of parley. Wounded are being evacuated along a safe corridor – respected by both sides for a change – and it looks as though the siege is nearly over. Some 300 including 50 plus wounded have been evacuated from the steel works, leaving 600 still in there. I don’t expect they will remain very much longer. Next will come the haggling before a prisoner exchange. I find this all very oriental but presume the Ukrainians feel quite a home with this kind of hostage bargaining. So far, there is no mention of any UN or ICRC involvement but it’s likely if the ceasefire was respected.

As the Ukraine gains control of the tactical war, given the structural weakness of the main fighting formations of the Russian Army, one begins to see how the Ukraine could seize the initiative and take control of the strategy battle. On the evidence so far, one gains the impression Zelenski’s generals appear to know what they’re doing. If the Russians have 18,000 reserve troops in Belgorod an obvious move is to attack them when they least expect, or strike somewhere pivotal that’s far away and difficult for those troops to reach.  Belgorod anyway may soon fall within range of Ukrainian missiles.

I think the Ukrainians would be wiser to stabilise the eastern line of contact and then clear the Russians from their southern coast along the Black Sea. The best places to start that may well be not far west of Mariupol or to the east of Kherson. Half way  between Kherson and Mariupol there is a large area of Ukrainian partisan activity and that might provide the first chink in the Russian occupiers’ walls. The Ukranians are slowly receiving armoured vehicles to add to all the Russian ones they’ve captured. If they can use their armour as well as their modern medium artillery, they could dominate the battlefields. A Russian collapse is looking more than possible. Russian casualties are horrendous – our MOD calculates their losses so far at 30% of the troops assembled in February to cross the frontier. According to media reports Putin was willing to suffer 50% casualties – that’s about 60,000 young people killed or wounded, many maimed for life.  That number is no longer far off.

A ceasefire that freezes the lines of contact and leaves afloat the Russian Black Sea Fleet with its mines and blockade is no help to the Ukrainians and of no interest. Restoring their farming calendar and opening sea trade again with the world are essential for them.

Whatever form the eventual ending takes, it has to last – and for any international modern Marshal Aid programme that means defeating Russia.

May I add that Boris Johnson’s energetic diplomacy and Ben Wallace’s shrewd judgement and tireless efforts to help Ukraine played a key role in Ukraine reaching this pivotal position. Now as reborn nation all we need are the ships, submarines, aircraft, chopper, drones, tanks, guns and men to put our money alongside our mouth.