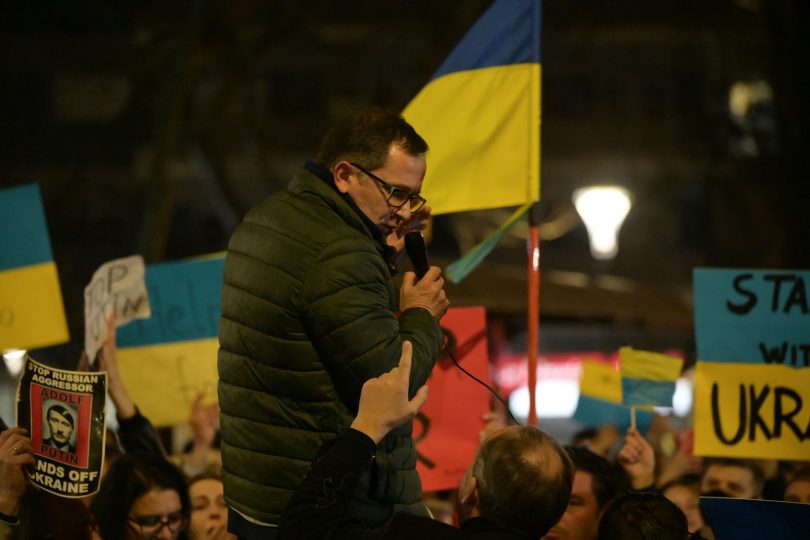 Although the Russian Army has made steady incremental gains of ground the Institute for the Study of War in Washington DC assesses these as very small and costly. Ukraine’s defenses held up well over several days of heavy fighting.

Since Friday 27 May the Russians have begun direct assaults on Severodonetsk despite so far failing to fully encircle the town. As the Russians’ record fighting in built up areas is poor they are unlikely to be able to advance rapidly in the town itself. They will expect heavy casualties and the ordinary foot soldiers may not press on regardless. Judging from the amount of effort the Kremlin is putting into gathering reserves – raising the upper age limit from 40 to 50, widening the net by increasing the number of Russian passport holders who live in the occupied areas, officers and commanders of the Border Guards in Southern Russia told to indefinitely cancel their summer holidays – they are increasingly short of trained reserves to replace huge losses.  All of which also implies that Putin has no intention of retreating because he dare not give up the fight.

Milbloggers on Telegram continue to criticise the Kremlin’s handling of the war and particularly its treatment of reservists from the breakaway republics. Some have been forcefully mobilized and then not paid for three months. The milbloggers have a large audience and growing impact – one militia head made a point of accepting the milbloggers complaints and assured them that his tactics were being adjusted as they urged. Milbloggers tend to support the war but despair at its prosecution. This form of electronic direct democracy ought to give our own diplomats some inspiration.

For the Ukrainians the battle for Luhansk requires fine judgment. How long do they stand their ground before risking their forces being encircled and cut off? Are the Russians reduced to an artillery army plus, by our standards, totally untrained infantry.  One British former adviser to Ukraine’s army describes Russia’s infantry as blokes with rifles.

According to media reports such as The Times who have correspondents on the spot, the present the battle is more an artillery duel. The Russians have a lot of artillery and still outnumber the Ukrainians in numbers of troops although the quality of reservist replacements appears low.

The dictator of Belarus makes a lot of threats and has placed several battalions near the Ukraine’s northern frontier but that’s almost certainly a feint, designed to tie down Ukrainian forces, thereby allowing him to claim that he’s helping Putin.

RUNNING WITH HARE WHILE HUNTING WITH THE HOUNDS

Much more dangerous is the ambivalent attitude of the EU. So long as EU’s sanctions are barely effective and Germany, Italy and others carry on buying most of their oil and gas from Russia – no less than £22 billions during April alone – Putin has no cash problems. Germans and Italians and the EU paid for his reform of Russia’s armed forces, now they pay for all the tanks, guns, aircraft and missiles that need replacement. Joe Biden’s Administration should spend a lot more time on this ridiculous situation and a lot less trying to bully Northern Ireland’s Unionists to surrender to Berlin via Dublin.

Northern Irish Unionists can be forgiven for expecting their safeguards share of the Good Friday Agreement to count as much as the republicans’ safeguards.  While the White House and Nancy Pelosi grandstand – fortunately Secretary of State, Antony Blinken, and Defense Secretary, Lloyd Austin, focus on the real problems.

We and the Americans are investing a great deal to help Ukraine repel the Russians. So we should. Supporting a country larger than France is not cheap. At the same time we should not need to also cope with downright hypocrisy where several EU members of NATO financially support Putin’s invasion. The EU/Germany calculate that America and Britain will tire of spending billions to arm Ukraine and use forums such as the WEF this week to nag and bully Ukraine into surrendering to Russia – because they want to resume business as usual. At the WEF in Davos they even wheeled out 99 years old Henry Kissinger. May I remind of Ronald Reagan’s advice about Kissinger in the last century – ‘ We’re gonna’ hear, Henry; we’re gonna’ cheer, Henry; and then we’re gonna’ forget all about Henry.’

This double talk becomes tedious. We must cut adrift the main culprits among the EU member states. Let them defend themselves. The list includes the so say neutral Irish Republic.

European reactions to the invasion of Ukraine have tended to confirm my doubts about the future of NATO as structured today. Only the Americans, British, Scandinavians, Baltics, Poles and Romanians are fully behind NATO’s efforts to help Ukraine.  The EU talks a lot to hide how little it does. Ask the Ukrainians. Finland and Sweden, both staunch neutrals, have applied to join NATO but Turkey is blocking their applications. The Turks should think again, they have a chance to show they’re willing to help not only Ukraine but many countries in the Middle East and Africa.

Right now with all these unknowns, maybe we should focus on what we do know. So far Russia has set the pace. That must change. May I humbly suggest it’s time we use a bit of imagination, seize the initiative, help Ukraine further with a switch of strategy.

TIME TO OPEN THE BLACK SEA

There’s been a lot of talk over the last week about ending Russia’s blockade of Ukraine’s ports along the Black Sea. Most of the talk poured cold water over the idea. Action of some form is becoming urgent because over 20 million tons of grain are stored onshore, ships unable to reach their markets because of Russia’s blockade. Within five or six weeks several more million tons will be harvested and looking for storage space. Breaking the blockade – enforced by surface ships, submarines, mines and missiles and aircraft – can only be done by a world coalition of navies.

This is a moment for cautious advance and that requires political courage.  Joe Biden’s White House is risk averse.

What is the risk?

After three months of pitched battles I think it’s safe to say that had Russia attacked a NATO member, despite our shamefully run down defences, the Russians would have taken a far worse beating than they  have done already in Ukraine. Even Putin got that message. His threats of nuclear attack are evidence that he comprehends Russia’s technical and training weaknesses. Putin won’t take us on face-to-face. He uses threats, news flashes of new super weapons aimed at the British Isles. Cyber warfare seems kept in reserve, most of the time though not always. I even suspect Russian fingers in timing of the threatened rail strike in Britain.

At the moment, thanks to Joe Biden, deterrence works for Putin but not for NATO. Is that wise? Definitely not. Russia may have 5500 atomic weapons but how many does a country need to obliterate another? My back of an envelope guesstimate is that the Americans, ourselves and the French have roughly a thousand nuclear warheads at sea in submarines as you read this. Putin knows this number perfectly well and I calculate that those around him know. I further calculate that they will not sacrifice a thousand Russian cities to save Vladimir Putin’s diseased hide.

Russia’s Black Sea naval assets are battered. The flagship was sunk and a frigate possibly damaged. The surface fleet does not stray far from Sevastopol. That still  leaves half a dozen submarines, if they are all seaworthy. Mines have been laid by both sides. A task force would require surface escorts, submarines and aircraft to deter Russia’s, and mine hunters. Not all need enter the Black Sea. The US Harry S Truman on patrol in the Adriatic Sea has sent its fighters as far as Lithuania on daily support missions.

The Turks are the first we need to bring on board because they control the Dardanelles and the Bosporus.

Once upon a time I was one of Her Majesty’s diplomats and served in Cyprus. I have experienced low intensity warfare between Greece and Turkey, both NATO members. I don’t think such an operation should be carried out under a NATO flag. Far better to form a coalition of the willing and gather a task force that includes countries such as Egypt and some of the lands in Africa and the Middle East that need Ukraine’s wheat and have credible navies or credible naval forces in one of the skills demanded. Or, if that’s not viable, at least invite some the countries to send a ship to join the blockade removal force. Minesweepers most welcome!

American and Britain could provide the backbone and deal with the air and underwater threats. Ukraine can help itself by removing the remaining surface threats. Ukrainian forces have been requesting Harpoons as they seek to break the blockade of Odessa’s port and counter sporadic attacks from sea-based missiles.

US Naval Institute News reports that the Danes are sending Harpoon long-range anti-ship missiles to Ukraine. Although they’re sending only one launcher, Harpoon will place Russian ships in the Northern Black Sea within range.  Danish coastal anti-ship missile batteries are mobile and fire the RGM-84L-4 Harpoon Block II capable of not only hitting ships at sea, but also targets in port and on land. (The Australian Navy fires them in salvos from ships.) The cruise missiles have a 227 kg warhead and a range of 124 kilometers, that’s nearly 80 miles. Their target acquisition systems are designed to cope with coastal clutter, they can tell the difference between a small island and a ship.

The missiles could also threaten the home port and logistic support hub for the Black Sea Fleet in Sevastopol, making it more difficult for Russia to rearm ships after missile strikes on land targets in Ukraine.

According to USNI News, after early successes in the Black Sea at the start of the war with Ukraine, the impact of the Russian Navy has largely been blunted. Early in the war, thousands of Russian forces landed near Mariupol. The Black Sea Fleet amphibious forces have been unable to land any troops near Odessa.

As the Ukrainians absorb all the new equipment provided by NATO, particularly from America and Britain, the possibility arises for a land thrust to cut off the Russian forces threatening Odessa from the rest of the Russian Army and the Crimea. That might help the Ukrainians fighting further east and will certainly reduce the threat to Odessa. And might cause panic in the Russian forces occupying south-western parts of Ukraine. The longer the war drags on, the more damage from indiscriminate Russian artillery fire and the more cost to the world economy. What may suit the EU at the WEF is not in the best interests of everyone else.