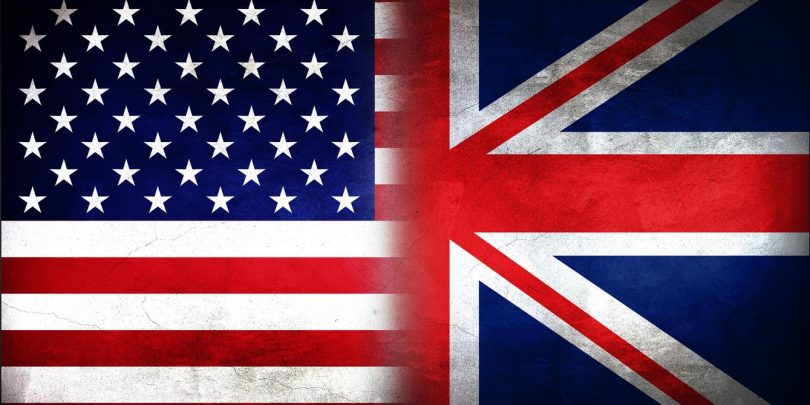 Former diplomat Nick Busvine takes a look at the Special Relationship in the light of recent suggestions from senior Democrats that the US is set to weigh in on Brexit negotiations. He worries that such statements are not only ill-informed about the Good Friday Agreement, but betray a lack of respect for UK democracy and constitutional arrangements – as well as putting at risk a rare opportunity to strike a mutually advantageous trade deal

Yesterday was Remembrance Day.  In a simple Covid-compliant ceremony yesterday morning in my capacity as Mayor of Sevenoaks, I laid wooden crosses on 50 war graves in our local cemetery.  Usually, this is well-attended.  But yesterday it was the local parish priest, the cemetery manager and I – all masked up, but determined in our own small way to honour those who died for us in the cause of freedom.  During the two minutes’ silence my thoughts were focused on one soldier, with whom I worked closely, who was killed in action in Iraq in 2007.

In two World Wars, Iraq and many other conflicts over the past century, UK and US soldiers have fought and died together.  The cold war and the war on terror have seen deep collaboration on any number of levels, not just on the battlefield but in the areas of diplomacy and intelligence.  Add to that cultural and business links, as well as family ties (my mother kept her US citizenship until the day she died).  We have cooperated closely because we share so much history and our fundamental attitudes to liberty, the rule of law and democracy have been the same.  A gold-embossed copy of the Magna Carta resides in Congress, a gift from the people of the UK to celebrate the bicentennial in 1976.  On receiving the gift, then House Speaker Carl Albert declared: ‘Nothing could be more symbolically important to the people of the United States.  Had there been no Magna Carta in 1215, there would have been no Declaration of Independence in 1776.’

Pro-American as I am, my years in the UK foreign service taught me not to be dewy-eyed about the UK/US relationship.  I met many anglophile US officials during my time as a civil servant – but I also met plenty who plainly did not admire the UK and who treated us with considerable caution and suspicion.  A visit to Boston as a student in 1980 was an early eye opener, when an Irish American family I met refused to talk to me on the grounds that I was a Brit.  Those were dark times during the troubles in Northern Ireland, but the depth of antagonism towards me – a complete stranger – came as real a shock.

Diplomatic officials like me were encouraged to put aside sentimental notions about the so-called ‘Special Relationship’.  We were told that Americans were tough-minded and that their approach to the UK was fundamentally driven by a clear-eyed focus on serving US interests.  History tends to support that view.  The UK did not finish paying off World War II related debt to the US until 2006.  Nor was the US shy about hustling the UK out of its colonial role when there were potentially lucrative markets to be snapped up.  But it has not all been one-way traffic.  During the 1812 war between the UK and US, the British took the opportunity to free thousands of US slaves.

There are always tensions in relationships and, very often, disagreements can be healthy and constructive.  Personally, I find the periodic agonising about what Washington thinks about the ‘Special Relationship’ utterly excruciating.  The relationship survives because of all that we collectively have invested in it in the past – and, frankly, because we need each other.   Yes, the US is a super-power and we – according to John Major this week – are merely lead players in the second rank.  But the US’s days of super-power pre-eminence are coming to an end.  America needs friends and allies to help keep the world on track – just like we do.  Where Washington and London have been brilliant over the years is in identifying where our interests coincide and in working together to achieve them.  The positive tone of yesterday’s call between President-elect Joe Biden and Prime Minister Boris Johnson suggests that there are multiple areas where we can collaborate over the next four years.

But….even for a trans-atlanticist like me, the suggestion that the US is set to weigh in on Brexit is a cause for the deepest of misgivings.  I was shocked to see the Irish American Congressman Brendan Boyle announce yesterday that the new Administration would not countenance the passage of the Internal Market Bill (IMB) stating:  ‘This is a clear red line for us, for President-elect Biden and Speaker Pelosi, to me and many of my colleagues including on both sides of the aisle.  If the UK moves forwards with this Internal Market Bill and essentially decides to rip up the withdrawal agreement they negotiated and signed less than a year ago, then there will be no US-UK trade deal.  Period.’  This comes on top of a Congressional letter on the same issue in September, on which I commented in a short article on this site.

While I completely understand that Brexit is not necessarily good news economically for Brussels and Dublin, Brexiteers take grave exception to the suggestion that Brexit in and of itself or the IMB are in breach of the Good Friday Agreement (GFA).  There is already an international border between the UK and the Irish Republic.  Different tax regimes and currencies prevail in both jurisdictions.  Put at its simplest, the GFA enshrined the principle of consent in Northern Ireland: that is, it gave the people of Northern Ireland the right to choose by means of a border poll to be held at an appropriate moment whether they wish to remain as part of the UK or to be unified with the South.  A solemn and binding guarantee was given to both the nationalist and unionist communities in NI that there would be no change in their constitutional status without a border poll being held.  Putting what amounts to a border down the Irish Sea would arguably abrogate the 1801 Act of Union and divide the UK internally.  This would unquestionably be a change of constitutional status for the people of NI – and would constitute a breach of the GFA if not sanctioned by both communities there.  The disputed clauses within the IMB are specifically designed to ensure that the Irish Protocol is interpreted in accordance with the prevailing constitutional status quo in Northern Ireland.  Moreover, in recent days both Sinn Fein and the DUP have expressed concern jointly that the interpretation of the Irish Protocol being pushed by Brussels could lead to food shortages in Northern Ireland.

One might reasonably ask why on earth did Boris Johnson ever sign the Withdrawal Agreement (WA) last year.  Many Brexiteers firmly believe that the WA is an atrocious document that runs fundamentally counter to UK interests.  History will not be kind to those in Theresa May’s administration who negotiated it.  My guess is that Johnson was determined to get a deal that would work well for both the EU and UK.  He recognised that the Irish Protocol was extremely ambiguously drafted and clearly hoped that Brussels would negotiate in good faith in order to arrive at a sensible implementation outcome.  Sadly, his hopes proved ill-founded.  Brussels, Dublin and their Remainer allies in the UK and the US have chosen instead to weaponise the Irish border issue as a negotiating tactic to force through the WA and a profoundly disturbing interpretation of the Irish Protocol.  This really is dangerous, not only because it – as Nobel prize winner Lord Trimble has so eloquently pointed out – drives a coach and horses through the GFA; but also because it threatens raise inter-communal tensions.

As the distinguished former Irish diplomat Ray Bassett points out in his brilliantly insightful book ‘Ireland and the EU Post Brexit’, Dublin had a choice after the Brexit referendum.  It could have sought to work actively with the UK on the Irish border issue.  Instead, it opted for a hostile approach.  That was a missed opportunity.  Fortunately, the ties that bind the UK and Ireland are arguably more profound than those between the UK and US.  The UK government is likely to bend over backwards to accommodate Dublin where it can – but there are constitutional lines beyond which the UK can simply not be asked to go.

I really worry that statements emerging from the President elect’s policy circle are at best ill-informed and, at worst, extraordinarily damaging.  The Brexit negotiations are complex and EU-related politics are something of a closed book to even well-informed people on both sides of the Atlantic.  But our American friends should at least understand the basics before charging in.

There is much worthy talk right now in the US about the importance of recognising the will of each and every voter.  The Brexit referendum in 2016 was won by Leave by a margin not dissimilar to that achieved by Joe Biden earlier this month.  The people of the UK have since voted strongly in favour of Brexit at both the European and General elections last year.  If respect for our fundamental democratic process is fraying on the US side of the pond, then – for the first time in my life – I find myself wondering whether the Special Relationship is worth the candle.  We don’t currently have a trade agreement with the US.  Right now, Washington has an extraordinary once in a lifetime opportunity to cut a deal of epic proportions with the UK.  If they blow it, ‘tant pis’, as the French would say.