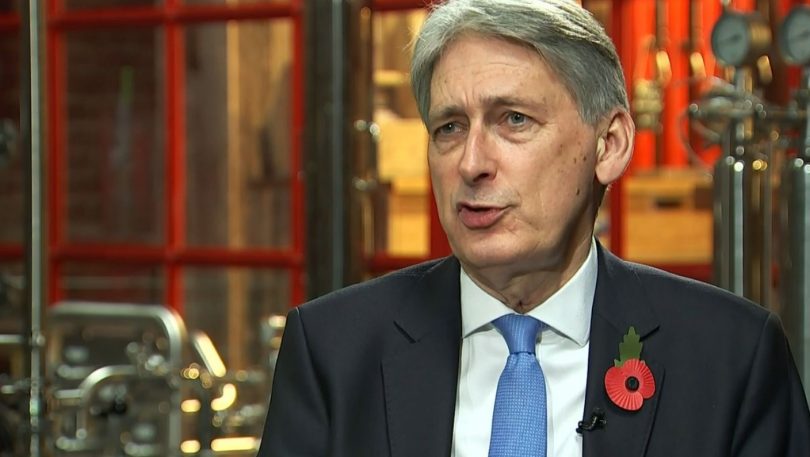 Swiss-based former diplomat Adrian Hill has translated an interview with Philip Hammond given to the Zurich newspaper, Die Zurcher Zeitung, on Nov. 7th 2019. This provides a good insight into what might be called the Hammond worldview on Brexit. Adrian has added some comments of his own in brackets.

Hammond: Until July 2019 I was an archetypal conservative. In more than 22 years in the British Parliament, I have never opposed the party line. Brexit has changed that. My rebellion has a very narrow focus: I want to prevent an unregulated withdrawal of the United Kingdom from the EU. I do not regret what I have done…There are some differences of opinion between some members of the current government and myself, but these are marginal. (As a voter I wouldn’t say the EU or OUT is marginal.)  It is mainly about the relative importance of our trade with Europe compared to potential trade with the rest of the world. (Again there’s nothing ‘potential about our present trade with the rest of the planet.) I believe it is important for our future prosperity to maintain our ability to trade with the EU. Other colleagues believe that the country must go its own way. I am not against building new relations. But it would be dangerous to do so at the expense of our economic relations with the EU.

(These answers have to be set against a policy of the Conservative
Party since the days when Ted Heath was Prime Minister of recruiting
only candidates who supported our membership of the Common
Market/EC/EU and its future plans. The modernisation of the UK economy had nothing to do with Europe.)

Question: Could the election in December be a moment when the Conservative Party changes again or even splits? You spoke before of a broad spectrum in the party. This seems to have narrowed.

Hammond: Firstly, the election will change the composition of the Conservatives in Parliament. (We voters are yet to be convinced.)  Secondly, our electoral system is ungracious towards smaller parties. (Unless the faces in Parliament change voters will not believe the attitude has changed.)

Question: What is your forecast for the election?

Hammond: I make no prediction. A lot can still happen
in a five-week election campaign.

Question: However, it is assumed that Brexit will come about?

Hammond: The only way to avoid this is for the Tories to lead the government and persuade Parliament to vote in favour of a second referendum. I do not think that will happen. (This is the Angela Merkel strategy – make the Brits vote to stay so it’s their fault, not ours.) There should therefore be a Brexit under the agreement negotiated by Johnson.

Question: How do you assess this in relation to that of Theresa May? When it was negotiated, you were Chancellor of the Exchequer.

Hammond: May’s deal provided for a relapse position, the backstop, for the whole country and not just Northern Ireland. This gave us greater assurance that the future partnership with the EU would be a close trading relationship. The backstop was a kind of guarantee. It also meant that there would be no border between Northern Ireland and the rest of the United Kingdom. The Boris Johnson agreement is different. Theresa May could have already concluded such an agreement. The EU proposed such an agreement. But May had rejected it because she did not want to accept a border between Northern Ireland and Great Britain. Nevertheless, Johnson’s deal can pave the way for a problem-free future. (May herself has admitted that her Withdrawal Agreement was intended as a bridge back into the EU.)

Question: The hard-boiled supporters of Brexit accuse you of not having provided enough funds for an unregulated Brexit. The negotiations with the EU had been made more difficult because there had been no credible threat
to leave the negotiating table. Your story sounds different. (There are 17.5 million hard boiled supporters of Brexit and another 4-5 million who think their vote must be respected.)

Hammond: My story is indeed different. The accusations are nonsense and serve the Brexiteers’ narrative. We have all made reasonable preparations. It is now clear that there is an agreement. Some expenditure was probably not necessary. Overall, however, we have kept the balance. As Chancellor of the Exchequer, you also have to protect the taxpayer. (He’s accusing Boris Johnson and others including many in business of making it up.)

Hammond: I do not believe that the negotiations with the EU work that way …

Question: What would a good agreement for the United Kingdom look like?

Hammond: A deal has to be judged on whether the government will succeed in reaching a comprehensive partnership agreement with the EU where the border between Northern Ireland and the rest of the country remains open and where Britain has open access to the EU market and vice-versa. This means that the government must commit itself to seeking such a comprehensive agreement. This also means that compromises must be made. The truth is that the real negotiations on the future relationship are only just beginning. Some of my colleagues think that this will be possible in six months. The majority of the experts, however, think that this is ambitious. The fact that the United Kingdom was an EU member is irrelevant. They are new trade negotiations. Each EU Member State will defend its own interests against the British demands. (Beware the next year, Boris.)

Question: Do you completely rule out an unregulated Brexit?

Hammond: There won’t be one immediately. But there is a danger that after the transition phase until the end of 2020 such a Brexit could come into
being if no agreement was negotiated. (Better long before: every month costs £1 billion.)

Question: How do you see the future of the important British financial sector?

Hammond: The British economy is indeed dominated by the services sector. We need open access to both trade in goods and trade in services. For the financial sector, this could be achieved by recognising the equivalence of regulation. But it would have to be an equivalence regime that works. When Switzerland recognised equivalence on the stock exchange, it itself learned that this process was political. Itis not possible to build a derivatives market worth billions on such a basis. It is in London’s and Brussels’ interests to build a new equivalence arrangement. (Why not just say if the EU won’t, they will collapse the Euro?)

Question: Switzerland would be a natural ally in this area.

Hammond: In the financial field … Switzerland and the United Kingdom do indeed represent a large part of Europe’s total capacity. Many commentators in London and Zurich would also like to see more alignment with the US than with the EU. (Surely this is going to happen whatever the governments mess up – people do business with each other, not with governments.)

Question: A Brexit fatigue has been noticeable in Brussels for some time now. (That is interesting.) Apparently, the EU has resigned itself to the fact that the British are leaving the joint club. How will this change the EU?

Hammond: The United Kingdom will have to look at the world outside Europe. That would probably have happened anyway. If you’re a big exporter of services, you’re typically drawn to where the biggest growth is. And that is Asia. The UK already has strong links in Asia. The future of British services therefore lies in more trade with the rest of the world and relatively less trade with Europe.

Question: Can trade, especially with the US and Asia, replace the potential
losses in Europe?

Hammond: No. Europe is by far our largest trading partner. In addition, many British suppliers are part of complex supply chains in Europe that cannot simply be exported to Japan or Australia. I therefore fear that it would be painful for these industries to lose access to these supply chains. (He’s talking nonsense to anyone who does business in the Far East – frankly, it’s easier than selling to Europe.)

Question: London has so far acted as an important bridge between the US and other European countries. Is this role affected by the Brexit?

Hammond: Yes, that will happen. Some in the government are in favour of a closer strategic and military link with the US. The relationship could indeed be deepened. But I am not convinced that the appetite for a great trade agreement, which President Trump always talks about, is really that big. Because the British and American economies don’t go together so well for a great trade agreement. (This last sentence is absurd. He’s treating the EU as though it’s one market – try selling snow-boots in Saint Tropez. Ours and the North American economies, don’t forget Canada, are probably the most
intertwined in the world. Starting with nearly 400 million people who
speak English with the similar legal and political systems and a fairly high general standard of living.)

Extracts from an interview given by Philip Hammond to Gerald Hosp in the NEU ZURCHER ZEITUNG (7 Nov. 2019), with comments in italics by Adrian Hill.