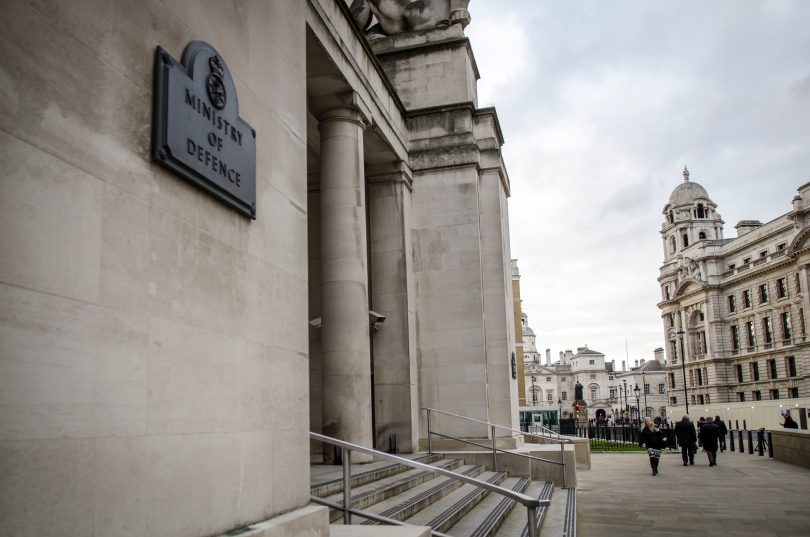 Gwythian Prins discusses a shocking security breach by fervent Remainer Angus Lapsley, the former UK Ambassador to the EU’s Political & Security Committee, who turns out to be the very person who left Top Secret British security files at a bus stop in Kent. Lapsley’s actions since Britain left the EU have threatened to do serious damage to the UK‘s defence interests, but his influence remains strong.

The name of Angus Lapsley will not be unknown to attentive readers of Briefings for Brexit/Britain.  He was first introduced in May 2018 as one of the enthusiastic British remainer gatekeepers of the Hotel California vision of the EU that is shared by senior Brussels officials, of whom, as the last UKREP (Ambassador) to the EU’s Political & Security Committee (PSC) he was once one: the night manager programmed to receive only, so that “…you can check out any time you like. But you can never leave”.  Apart from his brief start in the Ministry of Health in 1991, from which he was plucked to become Tony Blair’s Home Affairs Private Secretary, forming career long associations, Mr Lapsley’s entire Whitehall career has revolved around his vision of Britain in and under the EU’s legal carapace, and most especially our defence and security identity. Whether in London or Brussels, that has been his special focus; and while, as the Eagles have it, he personally may enjoy being a prisoner in Hotel California “of our own device”, his fellow citizens did not share that view.

The people of Great Britain left the EU in their biggest ever democratic exercise; and Mr Lapsley did not understand why. As I reported in 2018,  “…at the 2016 European Forum Alpsbach, a convivial gathering that gilds the lily for busy diplomats, in an open source recording published by the Alpsbach Forum he observed with self-deprecating humour and to consoling giggles from the audience that he did not understand the referendum result (“honestly, ich verstehe nicht”).” His associated views can be heard through the link to that article in footnote 2. The career theme is consistent: the EU Commission is needed to respond to all modern threats in Europe. ‘But reminder that defence no longer member state preserve in EU’ (sic). We ‘rather like’ its global strategy: we helped to write it. We wish to be as close as close can be. Where is NATO in all this? We’ll come to that.

Lapsley’s views were echoed in May era government documents such as the September 2017 Dept for Exiting the EU report and its Technical Note in May 2018: we should seek an “ambitious administrative relationship with the European Defence Agency”; we should hold “discussions on models of participation.” Mr Lapsley has had an uncanny ability to have been in the right post at the right moment to be able to advise that the newly liberated sovereign UK should take actions to re-subjugate itself under EU powers. His published CV shows an amplifying counterpoint.

In 1999 he joined the FCO, leading the EU Institutions Unit during the Nice Treaty negotiations. He served in Paris between 2001 and 2005 on foreign and security policy issues under HMA Sir John Holmes, formerly Mr Blair’s principal private secretary and latterly a controversial Information Commissioner. From 2006 he was Deputy Balkans Co-ordinator, and from 2006 to 2010 he was Counsellor and Head of the Common and Foreign Security Policy (CFSP), Common Security and Defence Policy and EU Enlargement team at the UK Representation to the EU. This was when EUDU was incubating. He was next Director (Americas) in the FCO, before moving to the Cabinet Office as Director in the European and Global Issues Secretariat in April 2012. He also led the Cabinet Office’s role on the review of the balance of competences between the UK and the EU – an influential role. From March 2015 until September 2017 he was the UK’s Political and Security Ambassador to the EU.

Immediately after the vote to leave on 23 June 2016, as UKREP PSC, Lapsley was advocating and advising ministers (including Boris Johnson of course) on British entry into new EU defence union plans launched that November which threaten aggregation via the ‘Monnet Two Step’ designed into their very core. Returning to Blighty and to the FCO, Lapsley became Director for Defence and International Security 2017 to 2019 leading the team which formulated ministers’ policy in respect of the EU Defence Union which he had just been instrumental in helping to form. As reminded above, this team, in liaison with MoD and DExEU advised that post-Brexit agreements (which had been advised on and negotiated by Lapsley) found their way into the May Government’s exit plans. These are facts.

Lapsley was next loaned to MoD in 2019 where, as the ‘strategy and international’ lead, he could talk up the EU agreements his FCO team had placed into the exit plans. That is something which he did regularly and on the record, including next door at the Royal United Services Institute. Also facts.  Now it has been revealed by authoritative Whitehall sources that he was being lined up to become our next Ambassador to NATO. That would have been an ideal position from which to down-play US anxieties about the endeavours to create an EU defence union, about the EU’s clear duplication of NATO and could also have provided a strong platform from which to advocate incremental UK re-entry into EU schemes such as the European Defence Fund, PESCO and the European Defence Agency: all structures which in previous posts he has both helped to shape and advocated. Indeed, he might have helped bring NATO into the EU’s force field too. Yet this cannot now be.

Major General Julian Thompson, RM, who commanded the San Carlos landings on the Falklands in 1982, who is now the Chairman of the Veterans for Britain Board, explained why in a Letter to the Editor sent to the Daily Telegraph. It was of sufficient importance to merit an accompanying news article by the Defence Correspondent and is reproduced here in full (Daily Telegraph 6th August 2021):

SIR – I and my colleagues on the board of Veterans for Britain are alarmed to learn that Pentagon sources are so disturbed by the UK’s failure to prosecute and dismiss Angus Lapsley for his major security breach that it brings our reliability in “Five Eyes” into question.

We are also deeply concerned about the implications for national security of such leniency over laxness in handling classified information.

What more does Mr Lapsley have to do to jeopardise national security to be prosecuted under the Official Secrets Act, as more junior officials have been for lesser offences (for example, Richard Jackson in 2008)? Why was this Government ever considering appointing such a person to our ambassadorship to Nato? Why is Mr Lapsley reportedly still in the frame? Why does the Foreign, Commonwealth and Development Office appear to be shielding him?

The Lapsley case is bigger than one man, but one man must be prosecuted and, if guilty, dismissed.

The comments below the defence correspondent’s article on the General’s letter are numerous and instructive. Many are from retired armed forces and foreign service people and they are entirely aligned with the General’s opinion. There is palpable fury in many for Mr Lapsley has just become nationally notorious. The Director General (Strategy & International) of the MoD has been revealed as the man who, as yet without convincing explanation, left behind at a bus stop in Kent a large bundle of relatively low classification MoD papers among which were top secret papers on possible UK Special Forces roles in Afghanistan after the Biden-engineered defeat of twenty years of western sacrifice and discussing possible sailing routes for HMS Defender either close to or through contested waters near Crimea. (The destroyer took the more confrontational route.)  The finder handed them in not to the Police but to the BBC.

General Thompson mentions the case of Richard Jackson in 2008. This senior middle-rank MoD official was punished for mislaying on a train a Joint Intelligence Committee report on the relative capabilities of Al Qaeda and Iraqi forces. He pleaded guilty without demur and told the Court that when he discovered his mistake he was physically sick and frantically toured railway lost property offices. Nonetheless the judge imposed severe punishment and told him that he was lucky to have escaped imprisonment.

The Lapsley case appears to be a more serious matter, both in subject content and in his rank and the circumstances. ‘Pink’ (Top Secret’) papers should not normally leave secure space in the MoD; and if they do, only in special cases and with elaborate signings in and out. As senior a securocrat as Mr Lapsley must know this almost instinctively. What did he think he was he doing walking out with this bundle? Much more in the episode is still unclear but will inevitably become less opaque because, although different in cause, the Lapsley Case has a potential to be as significant an intelligence leak scandal as any since the Profumo Affair. In particular we await Ministerial views and actions, specifically in the first instance from the relevant departmental ministers, Mssrs Raab and Wallace. Watch this space.