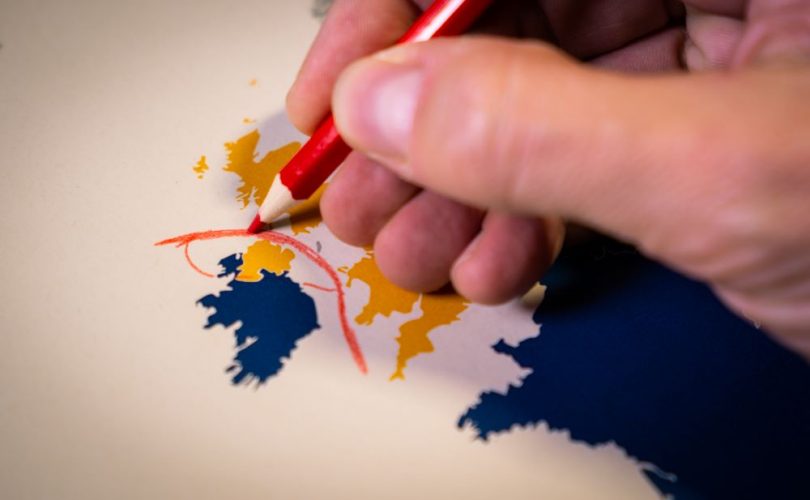 Tracking developments in British-Irish trade continues to be difficult due to re-routing of trade flows caused by the Northern Ireland Protocol and statistical distortions. A careful sifting of the evidence nevertheless suggests that the growth in cross-border trade in Ireland suggested by Irish statistic – particularly Northern Ireland sales to the Republic – is exaggerated. Overall UK sales to the Republic are also likely to be stronger than Irish data suggest. Hard information on GB to Northern Ireland flows remains minimal, but anecdotal evidence points to significant disruption.

The Northern Ireland Protocol plus the UK’s exit from the EU single market and customs union has led to a considerable shifts in trade patterns between Great Britain, Northern Ireland (NI), and the Republic of Ireland. This is obvious from looking at headline trade data produced by both the British and Irish authorities. But as we have previously argued, distinguishing between real changes in underlying trade flows, diversion of flows via Northern Ireland and statistical distortions is difficult.

Since our previous look at this issue, additional evidence has come to light on four main areas of contention –

According to Irish statistics, there has been a boom in cross-border trade since the start of 2021, with monthly average NI exports to the Republic up over 60% on 2020 levels and NI imports from the Republic up almost 50%. Using 2019 as the comparison year (arguably better due to covid distortions), the rises are 54% and 35%. But there are several reasons for thinking the scale of this boom is exaggerated by the Irish data.

First, measurements of cross-border Irish trade have historically been inconsistent and this problem has become worse since the start of 2021. Data from NISRA suggests NI firms sold about £3.3bn of goods to ROI in 2019. But Irish data show a figure of only £2.1bn. Similar issues exist with regard to Irish exports to NI. In 2021, a further statistical mismatch has appeared between Irish data, which show imports from NI averaging about euro 300mn per month, and a new Eurostat series that suggest imports averaging euro 470mn per month. These anomalies should immediately make us cautious about interpreting recent reported trends in cross-border trade.

Secondly, a large chunk of the rise in NI-ROI trade recorded by Irish statistics relates to a small number of erratic items. Most strikingly, ROI imports of medicines from NI – which have been historically minimal, totalling just euro 7mn in 2018 – exploded to euro 420mn in the first eight months of 2021. This alone accounted for 36% of the recorded rise in ROI imports from NI.

Moreover, there has also been a sharp rise in Irish imports of electric current and of ‘unclassified’ items from NI. These items, plus medicines, account for 55% of the rise in Irish imports from NI (see Chart 1). There are oddities in Irish exports to Northern Ireland too, again involving medicines but also iron and steel and (in some months) road vehicles, clothing, and electrical machinery.

Other data sources also cast doubt on the scale of the rise in NI exports to ROI – and even whether any rise has occurred at all. The recently published UK regional trade statistics show a sharp rise in NI imports from the EU (including Ireland) in Q2 2021, but no rise in NI sales to ROI is visible – they were lower in Q2 2021 than sales in both Q4 2020 and Q2 2019 (Chart 2). Given that NI exports to ROI account for 60% of NI exports to the EU these trends are impossible to square with a sharp rise in sales to ROI alone.

Figures for freight movements also do not seem to fit with the notion of greatly expanded cross-border trade in Ireland. While Irish trade statistics show trade surging since the end of 2020, HGV movements across the border have risen only 8% and are at a similar level to the average of the last several years (Chart 3). LGV movements have risen somewhat but their monthly average remains below that recorded in 2019. If cross-border trade really has surged, it’s not easy to see how the greatly expanded volume of goods has been moved.

Turning to UK-Irish trade there are also serious anomalies in the data. According to Irish data, UK exports to ROI have dropped sharply since the start of 2021, and in August were 15% lower on a year before. But UK doesn’t show this pattern at all – after a slump at the start of 2021, UK data show sales to ROI recovering strongly to a level 7% above that of a year ago. This divergence is large and unprecedented historically, and importantly is not visible in the import data where the UK and Irish data sources largely agree (Chart 4).

One factor behind this appears to be a change in the measurement of UK imports from the Irish side. Since the start of this year, Irish imports from the UK are no longer measured via the EU Intrastat system but (as non-EU trade) through customs declarations. Importantly, Intrastat measures trade flows by country of dispatch rather than country of origin. This means that goods sent from the UK to Ireland that were originally imported from a third country (e.g., clothing, or electrical items from China) would have been recorded as a ‘UK’ import in the past but are now not so. With the UK having acted as a distribution hub for Ireland in the past, the volume of such goods may have been substantial. UK trade statistics should have been unaffected by this measurement change and so should be the better guide to trends in UK-Irish trade (for more on this issue, see here).

There is no doubt that the combination of the UK leaving the EU customs union and single market and the Northern Ireland Protocol has led to a significant re-routing of trade. This re-routing has taken several forms:

These shifts are visible in the port traffic data. In Q2 2021, roll-on/roll-off freight between Irish and British ports was 20% lower than in the same period of 2019, while volumes on Irish/EU routes were up 100%, and flows via NI ports (especially outbound flows) were up.

This re-routing makes interpreting underlying changes in trade flows in 2021 very difficult, especially flows from NI to ROI which are still recorded using the Intrastat system that doesn’t distinguish whether goods dispatched from a certain country actually originated there. It is for example very likely that most if not all of the huge rise recorded in medicine ‘exports’ from NI to ROI do not represent goods manufactured in NI (the value involved would represent an implausibly high share of total output of such goods in NI – total value added in pharma there is around £300mn per year but increased ‘exports’ to ROI in 2021 so far are already equivalent to this figure!). Instead, these medical products are probably from GB (notably, the Irish statistics also show a sharp fall in medicines imports from GB together with soaring ‘imports’ from NI) or the rest of the world.

An unknown proportion of the rise in other NI ‘exports’ to ROI this year recorded in Irish statistics also probably represents goods diverted via NI from GB and beyond. Some of the increase in Irish ‘exports’ to NI also probably reflects goods bound for GB which have been re-routed via NI. The sharp rise in NI’s shares in total UK sales and purchases from ROI is suggestive in this regard – these shares have risen from 10-15% in 2018-2019 to around 25% now (Chart 5). Such a big rise in such a short time is most unlikely to reflect increased market share for NI firms versus GB ones or Irish firms suddenly finding new end customers in NI to replace those in GB.

But what about actual trade diversion? Unlike the geographical re-routing of goods from a given origin to a given destination, this (properly defined) refers to the trade of one country being inefficiently displaced by the trade of another due to increased trade restrictions. This is undoubtedly happening but it is hard to pin down the full extent of it due to weak data – specifically, there is no timely and detailed data on flows between GB and NI which might allow us to estimate the extent of trade diversion.

One very useful recent piece of evidence on the decline in GB to NI trade is a survey by the UK Food and Drink federation of its GB members’ sales to the province. The survey finds that in total, sales have declined by 13% with a 10% drop even for larger business (better able to manage the paperwork). Dramatically, the survey suggests that if the grace periods on supermarket sales came to an end with nothing to replace them, GB food and drink sales to NI would fall a further 33%. This illustrates starkly the extent to which the grace periods are preventing a massive – and economically damaging – diversion of trade as in the event of such a slump in GB food supplies NI consumers would be forced to turn to more expensive EU goods.

Anecdotal evidence of the damage done to GB to NI trade across a variety of sectors is also abundant. Some GB medicine suppliers have started to pull out of supplying NI. Live animal movements and movements of some plant products such as trees have been severely restricted. Major NI hauliers have described the protocol as a ‘lose-lose scenario’ due to the weight of additional border bureaucracy with GB firms being put off supplying NI. Sales of diggers, farm machinery and lawnmowers from GB to NI have been restricted. Chronic shortages of vets to undertake veterinary checks are damaging the flow of agricultural goods. NI firms are reporting increased delivery times and costs from GB suppliers.

Given this, it is highly likely that a significant proportion of the increased imports from the EU shown in both Irish and British statistics represents the displacement of goods that would formerly have been sourced from GB. This is trade diversion and comes with an economic cost for NI as the displaced GB products would, in the absence of new trade restrictions, be cheaper.

It is important to understand that the extent of disruption to GB to NI trade flows – and the accompanying costs to NI consumers and businesses – has been considerably reduced by the ‘grace periods’ that have prevented full border processes being implemented for categories of goods such as supermarket supplies and medicines. Should full border processes be brought in for these goods, the economic (and potentially human) costs to NI would rise sharply. The extent of this can be estimated by noting that grocery prices in the Irish Republic are typically around 20% higher than in NI. A price rise on this scale would be a major blow to NI living standards.

Overall, it is clear that 2021 has seen massive re-routing of goods flows between Britain, Ireland, and Northern Ireland. But understanding what is happening to underlying trade flows is less easy. What we can say is that the measured rise in cross border trade in Ireland is greatly exaggerated, especially from NI to ROI. Indeed, for NI the picture seems to be one of increased difficulties and costs importing from the province’s main supplier – GB – with little genuine upside in terms of increased exports (remember, the protocol only maintains pre-Brexit levels of access to EU markets, it does not increase it). This is not much like the ‘best of both worlds’ that some politicians promised the Northern Ireland Protocol would deliver. 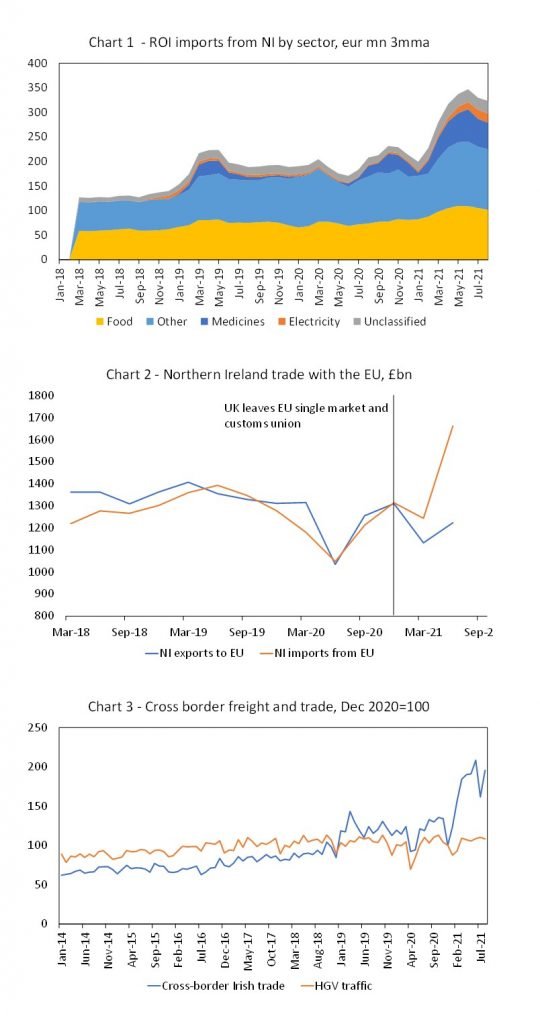 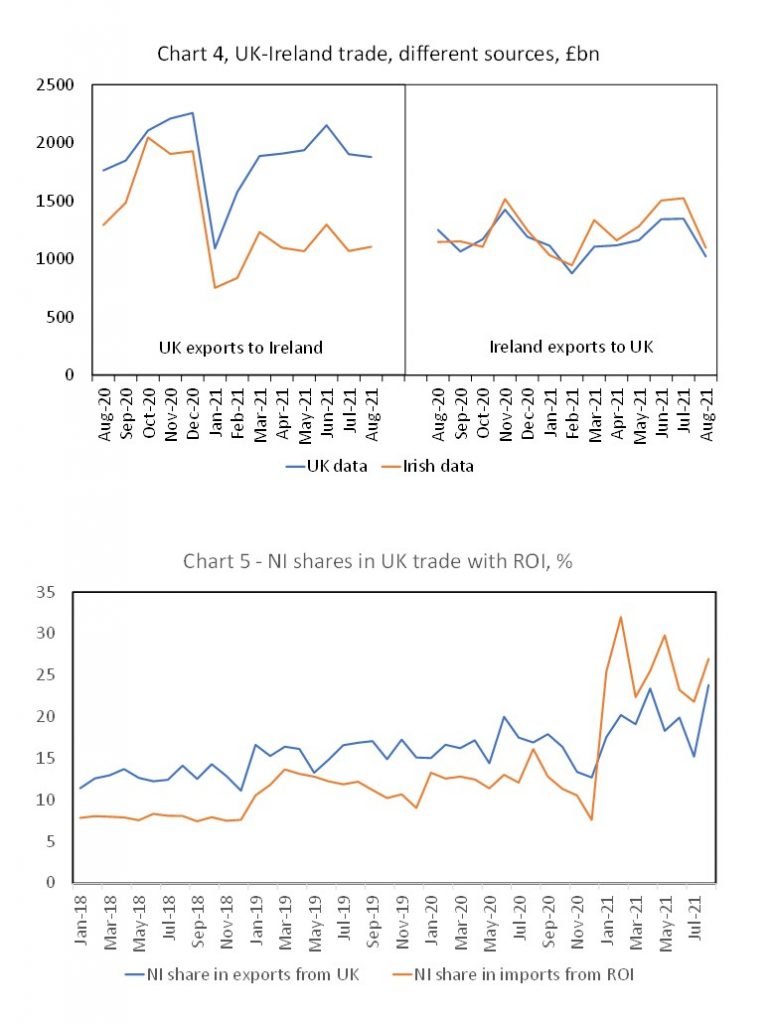