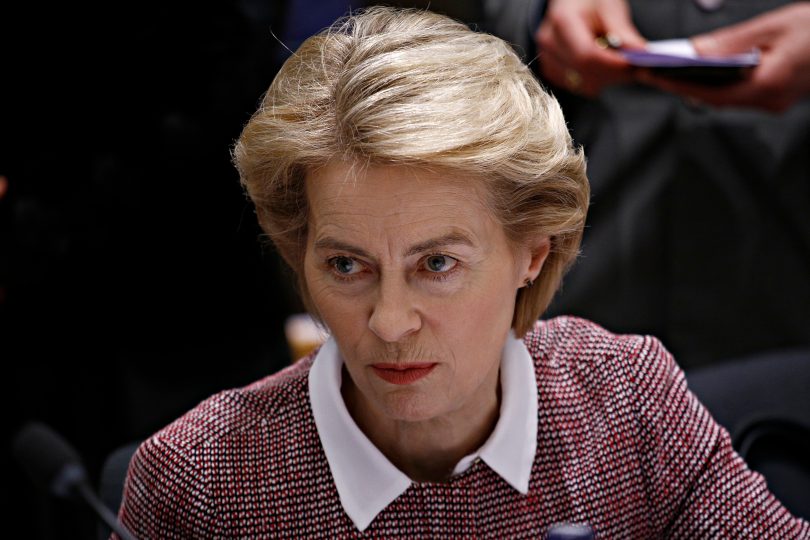 The EU supposedly prides itself on promoting the rule of law. Yet its latest threats to seize control over vaccines and other commercial property represent a grave threat to that principle, writes political scientist Dr Anna Bailey.

It is hard to overstate the legal and political importance of the EU’s latest threat to seize Covid vaccines produced on EU territory. When asked last week if the EU could invoke Article 122, ‘effectively seizing production or waiving intellectual property rights,’ Ursula von der Leyen responded:

‘All options are on the table. We are in the crisis of the century and I’m not ruling out anything for now. We have to make sure Europeans are vaccinated as soon as possible.’

It now looks almost certain that the EU will block the export of Dutch-manufactured components for AstraZeneca jabs to the UK. An export ban has already been applied once, when Italy invoked new EU powers to block the export of 250,000 doses of the AstraZeneca vaccine to Australia earlier this month. But the EU is looking at going even further still: granting itself the right to seize privately-owned factories and override commercial property rights.

For an organisation that supposedly prides itself on the rule of law, this would represent an extreme violation of private property rights. As Health Secretary Matt Hancock has noted, respect for contract law is, ‘the basis of international trade… there are very significant consequences to breaking contract law.’ The right to private property is also a fundamental human right under the European Charter of Fundamental Rights (where Article 17 also protects intellectual property, which covers vaccine patents).

Imagine the (justified) international outcry if Russia or China were to act in this way. Foreign Secretary Dominic Raab is right to point out that this is, ‘normally what the UK and EU team up with to reject when other countries with less democratic regimes than our own engage in that kind of brinkmanship.’

Vaccine nationalism as a threat to the rule of law

The EU’s very language belies its nationalist mentality and consequent disregard for private property rights. Von der Leyen has tried to invoke the concept of ‘fairness’, suggesting that all the EU is asking for is ‘reciprocity and proportionality in exports’ to ‘make sure that Europe gets its fair share.’ She complains that the EU has been exporting vaccines to the UK, while not receiving any from the UK in return.

Except, of course, that neither the EU nor the UK government produce vaccines – pharmaceutical companies do. And pharmaceutical companies are multinational private enterprises with global supply chains. The geographical location of production sites is neither here nor there. Credit must go to Irish PM Micheál Martin, who is one of the few sane voices in the EU speaking out against the perverse vaccine nationalism argument:

‘They’re not EU vaccines. These are vaccines paid for by other countries that are manufactured in Europe.’

What is a ‘fair share’, anyway? The EU spent seven times less per head upfront than the UK and the US on vaccine development, procurement and production. The UK government funded the research into the Oxford-AstraZeneca jab to the tune of tens of billions of pounds – with no guarantee of success. It also funded the development of a dedicated UK supply chain early on in the vaccine development process, becoming ‘effectively a major shareholder’ in that process. This it did in return for a contractual obligation that the UK supply chain it had invested in would supply exclusively UK vaccines, at least until the UK order had been fulfilled.

Free-riding is normally regarded as resulting in unfair shares, not the opposite. In that context, von der Leyen’s self-described ‘message to AstraZeneca’ that, ‘you fulfil your contract with Europe first before you start supplying to other countries,’ is no better than a playground bully threatening to steal another child’s dinner money because he neglected to bring his own.

The threat of physical force has been further underlined by Commission spokesman Eric Mamer, who stated:

‘This is not about banning vaccine exports. This is about making sure that companies deliver on their commitments to the member states and the EU that are inscribed in contracts that they have with us.’

Yet under the rule of law, it is the courts who act as neutral arbiters of contracts. One party to the contract using physical force to get their way – especially where that party is the state – can only be described as a violation of the rule of law.

The legal basis for the EU’s potential unprecedented nationalisation of private commercial property would apparently be Article 122 of the Treaty on the Functioning of the European Union (TfEU). This is an emergency clause that stipulates:

‘Without prejudice to any other procedures provided for in the Treaties, the Council, on a proposal from the Commission, may decide, in a spirit of solidarity between Member States, upon the measures appropriate to the economic situation, in particular if severe difficulties arise in the supply of certain products, notably in the area of energy.’

Article 122 was designed to provide emergency financial support to a Member State in dire need. The article’s second part states that,

‘Where a Member State is in difficulties or is seriously threatened with severe difficulties caused by natural disasters or exceptional occurrences beyond its control, the Council, on a proposal from the Commission, may grant, under certain conditions, Union financial assistance to the Member State concerned.’

Note von der Leyen’s keenness to point out that Article 122 has already been used once before – during the 1970s oil crisis. She was most likely referring to the issuance of EEC bonds to support member states in economic distress at that time.

But the issuance of joint bonds on commercial markets is in no way comparable to the arbitrary requisitioning of private property. The former depends upon respect for contract law; the latter destroys it. Nevertheless, European Commission president Charles Michel has reportedly received legal advice that Article 122 could be interpreted in such a way as to support the latter.

It would be (to use considerable understatement) something of a stretch for Article 122 to serve as the peg on which to hang a legal justification for private property requisitioning. Nowhere in Article 122 does it hint at such a measure as one ‘appropriate to the economic situation’. Indeed, the reference to ‘a spirit of solidarity between Member States’ would appear to underline that the article concerns one or more member states lending assistance to another, rather than the seizure of property that does not belong to any member state.

But needless to say, if the Commission decides that Article 122 should be interpreted in such a novel way, then a legal basis it will be. To paraphrase Lewis Carroll’s Humpty Dumpty, ‘EU treaties mean just what the EU chooses them to mean – neither more nor less.’

The EU has plenty of form in legal Humpty-Dumptyism: from the fledgling ECJ’s unilateral assertion of the supremacy of Union law in the 1960s, to the EU getting around its own no-bailout clause last year by declaring that its Covid bailout was not in fact a bailout.

The big difference, of course, is that these previous ‘flexible’ readings of EU treaties only affected the EU’s own member states. But now we have a situation where the EU is proposing to adopt a dubious reading of its own laws in order to seize the legally-owned goods of a private company which have been paid for by a foreign government. Taking the Continent back to the dangerous practice of legalised theft practiced by previous autocratic governments will represent a very dark day in EU history.

Once violated, trust in private property rights and the rule of law is very difficult to re-establish. One should not forget what happened to Humpty Dumpty after his ‘great fall’: