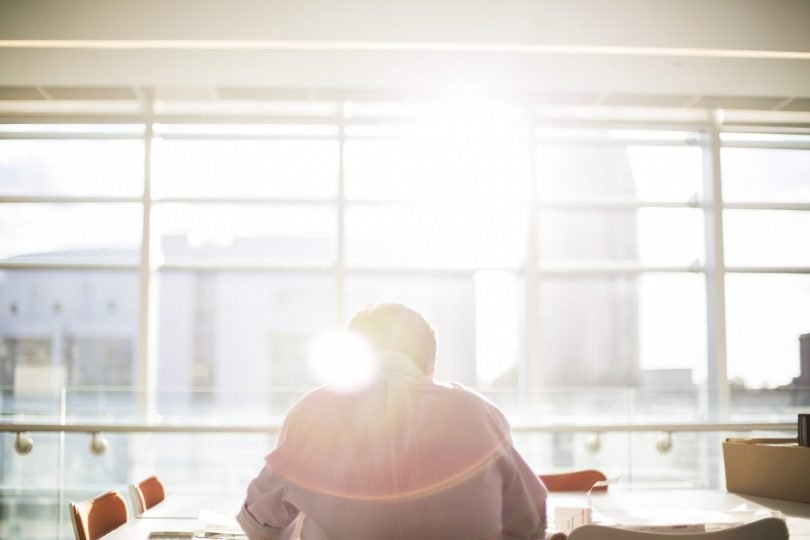 Much attention is currently focussed on when the lockdown can be ended, the economy returned to normality and the UK to leave the transition as planned. This article assesses the evidence and suggests mid-May as a possible date to begin a return to normality.

It is now painfully obvious that the pandemic in Europe, including the UK, is orders of magnitude worse than in the far east. Shockingly, the UK death rate per head of population looks likely to end up close to 200 times the reported Chinese rate. Even if we disbelieve the Chinese figures, the per capita death rate the UK will probably end up almost 100 times higher than South Korea. In addition to the personal tragedies of a death toll approaching 1000 a day, there is collateral damage of a partially shut-down economy, not to mention pressures to delay us exiting the EU transition period. To assess when all of this might end, we need to predict the course of Covid fatalities.

In the early days of the pandemic, predictions of its course and hence the need for medical, social and economic counter measures were dependent on epidemiological models[1]. These model the spread of the virus through the population and the likelihood of hospitalisation and death. They are sophisticated mathematical systems depending on assumptions. The assumptions are themselves based on past experience of similar epidemics on such things as the number of people infected by each carrier of the virus.

As the pandemic develops, a second source of evidence opens up. This is the daily path of recorded cases and fatalities across the countries affected by the virus. We now have nearly 100 days of data from China since the first recorded deaths and 50 days for Italy. In the UK it is now 39 days since the first recorded death on March 5th. The earliest recorded cases of infection are several weeks earlier than these dates but data on cases are unreliable since they depend heavily on testing, making international comparison difficult.

There are also problems with the data on fatalities. Covid-19 is now a notifiable disease in the UK, meaning that all deaths of people infected with the virus are recorded as having the virus as a cause of death. However, respiratory conditions are a common cause of death at any time, often involving several such conditions at once. It is not always clear what the actual cause of death was for patients with Covid-19. It is more accurate in some cases to say that a patient died with the virus than of the virus. In addition, recorded fatalities connected with the virus in the UK are hospital deaths. Other fatalities, i.e. those in the community or care homes with death certificates signed by GPs, have not thus far been included. The ONS record a 24% gap between the two sources in the first fortnight of the epidemic.

Nonetheless the evidence on deaths are likely to be much more reliable than recorded statistics on the number of cases, especially for international comparisons. Now that we have several weeks of daily figures on fatalities it is possible for economists and others, practised in the analysis of exponential trends, to take an informed view of how the pandemic might develop. What do we think we know? First, even making allowance for some lack of trust in Chinese data it is clear that western nations are not dealing with the pandemic nearly as effectively as China or South Korea. Italy with 5% of China’s population has already recorded six times as many deaths. This is a per capita rate over 120 times as high as China or South Korea. Other western nations including the UK, USA and even Germany are following Italy’s trajectory a few days behind.

Italy’s early and severe epidemic appears to have been related to links with the Wuhan region through the textile industry of Lombardy including a large number of Chinese nationals resident in Italy[2]. The trajectory of Covid-19 fatalities in Italy rose rapidly after the first recorded case on February 22nd. Most data series begin with the tenth recorded death in order to ignore the sporadic nature of early fatalities. In Italy this point was reached 4 days after the first recorded death.

At first, the number of daily reported deaths rose at a rapid rate of over 40% per diem, but since then the growth of daily fatalities has steadily slowed with numbers deaths rising at 3% in most recent days. There is evidence that the decline in fatalities has accelerated over the two last week as the Italian lockdown measures announces on March 9th have begun to bite with a lag of around a fortnight. Initially the growth rate in the numbers of Italian deaths was decreasing by 5% a day. Over the last week this decline increased to 9% a day. This extra deceleration makes a huge difference to the eventual total number of deaths. If this rate continues, the calculation is that by the end of April the daily number of deaths in Italy will be close to single figures by which time 25,000 people will have died (i.e. 6,000 more than the current number). Reports suggest the Italian government is considering reopening schools on May 4th.

The number of deaths in the UK has followed the Italian trajectory albeit a little higher and with a lag of a fortnight, reaching just under 10,000 on April 28h, a level reached 13 days earlier in Italy on March 19th. It is too early yet to see the effect of the UK lockdown which started in earnest on March 24th. However, if we assume that the UK continues to follow the Italian experience, including the latter’s post-lockdown experience, it is possible to estimate the future path of fatalities.

The chart below shows the actual and projected deaths for both the UK and Italy. It covers the first 100 days following the initial recorded fatality in each country. In Italy the peak for deaths occurred 11 days ago at the beginning of April. Since then the daily number of fatalities has fallen by almost half. The UK appears to be reaching a peak this weekend at close to 950 deaths a day. Projecting these trends suggests that the cumulative number of UK deaths will level off in another month at approaching 30,000, and above the Italian total of 25,000. Since the winter and spring of 2020 has been mild and hence good for flu deaths, total deaths from all causes in the UK up to March have not been above previous years. However, over the next three months the death rate from all causes is likely to be 20% higher than in a normal year. 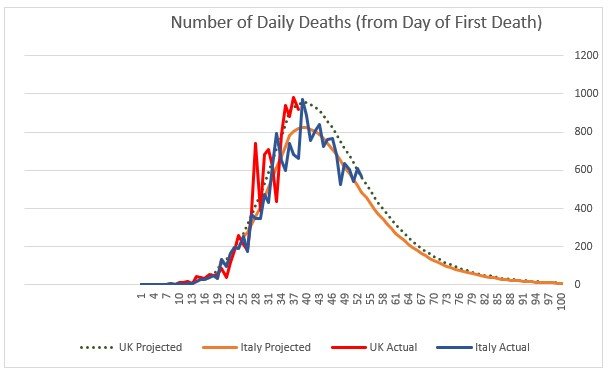 The good news is that by mid-May the number of deaths per day in the UK is projected to be below 100 and falling fast, reaching single figures by mid-June. This prediction depends on the impact of the UK lockdown and assumes an impact much the same as that in Italy. We have yet to see if this is realistic. The UK lockdown has been less severe than in Italy, but social resistance may yet prove greater in Italy especially in the south.

Assuming something like this trajectory occurs in the UK, what would be the consequences for the lockdown and for the economy? Once the daily number of deaths is back below 100 and falling fast in late May, we can expect strong public pressure to return to normality. This will be especially the case if Italian schools have reopened by May 4t h and other European economies are beginning to reopen. By then there should be enough data to know whether secondary outbreaks of the virus have occurred in countries in which economic and social life has returned to normal.

The epidemiologists at Imperial College estimate that around 10% of the population of Italy had contracted the virus by March 28th and 15% in Spain[3]. These levels are likely to be much higher by May but might still be short of the 60% usually assumed to indicate herd immunity for flu. The evidence from a detailed survey in Gangelt in north-west Germany suggests that a third of 1% of cases result in death. Using this figure, we can estimate that by mid-May 12% of the UK population will have been infected with the great majority having recovered.

Will this be a safe level to begin re-opening shops and restaurants? This will depend on the UK’s ability to accelerate its slow rise in testing capacity. If mass testing is possible and individual cases can be quickly identified and isolated along with their contacts, the disease may controllable without a continued lockdown. The evidence from Sweden suggests that this is possible even now. Swedish deaths are on a falling trend even though this may be a little slower than in countries with lockdowns.

One widely discussed approach for the UK is for young people to return to work while the elderly remain in lockdown for another few weeks. Despite recent deaths for young people and even children, the susceptibility of those under 40 is low, with fatality rates estimated at 2 in a thousand. By mid-May enough young people may have already contracted the virus to mean that mass testing of suspected cases and their contacts can keep the death rate falling towards zero. This would allow a partial re-opening of shops and restaurants cinemas and sport, perhaps with restrictions on densities. Arguably some shops like garden centres need not have been closed at all and these could re-open first.

Returning the economy to partial normality by late-May would do much to save large numbers of firms from bankruptcy and would greatly speed the path of economic recovery. Ironically by that point much of the financial assistance promised by the government under the Job protection and Self-Employment schemes will not yet have reached firms. Tax deferrals will greatly help cashflow but may not be enough to prevent many firms closing. Bank of England measures to increase bank loans and lines of credit do not seem to be working well and in any case struggling small businesses are likely to resist taking on additional debt.

If the Government can expect the economy to begin returning to normality by mid-May it makes it even more imperative that it finds ways to quickly get cash to firms, particularly small firms, to allow them to survive what is likely to be a relatively short hiatus in revenues.  A rapid tax rebate to firms in proportion to furlough applications would for instance speed what is otherwise a slow process. The Government should also consider announcing an end to the lockdown, or at least a partial end, by mid-May. This will give businesses more certainty as to the scale of their future financial difficulties. It would also allow households to see an end and hopefully strengthen their resolve to tough-out the lock-down until then.  A plan to re-open schools, say, at half term would allow parents to plan ahead. Such announcements could come with a warning that the plans are conditional on predictions being accurate. In Sweden the government views its electorate as sophisticated and responsible. The UK Government might take the same view of the British people.

[1] In the UK government policy is most influenced by the modelling of Professor Neil Ferguson and colleagues at Imperial College. For instance see ‘Impact of non-pharmaceutical interventions (NPIs) to  reduce COVID- 19 mortality and healthcare demand’.