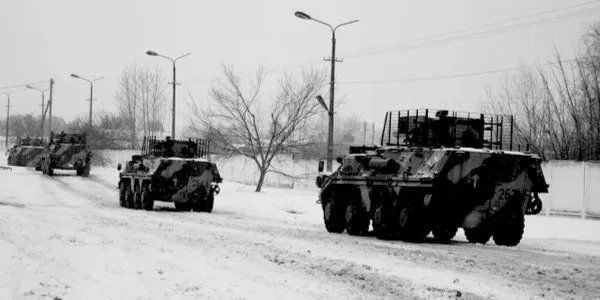 Lieutenant-General Jonathon Riley asks ‘What if Putin is not done, and the British Army does have to face Russian forces? So far, the Russians have not put their best trained and equipped formations into Ukraine, with the exception of some air assault forces. There is no outcome that looks good.

ACCORDING to Secretary of State for Defence Ben Wallace, Vladimir Putin is ‘a spent force in the world’ and ‘his army is done’ in Ukraine. Let us hope that Mr Wallace is right. He also claimed that the British Army had beaten the Russians in the Crimea and would do so again. Historians, including me, would take issue with his analysis of the Crimean campaign, but that is not the point here. The issue is the second part of his claim – quite a statement from a man whose party has initiated, and seen through, the thorough dismantling of British defence: now an army that could perhaps put a brigade into the field and sustain it for a few days in combat; that has been reduced to fewer than 200 tanks, no armoured infantry capability, outdated artillery and next to no air defence; an air force which consists of 15squadrons of all types of aircraft and a navy with a handful of frigates and destroyers and a few submarines. At least we still have a nuclear deterrent.

Perhaps Putin and the Russians are locked into a stalemate in Ukraine – we hear many claims of casualties from both sides, but almost no independent corroboration. Yet, if you have noticed, the Russians are doing pretty well in the south and southeast. What if Putin is not done, and the British Army does have to face Russian forces? So far, the Russians have not put their best trained and equipped formations into Ukraine, with the exception of some air assault forces. Various sources assess that elements of 11 Russian armies or equivalent formations have been deployed: First Guards Tank Army, Second, Eighth and Twentieth Guards Combined Arms Armies; Fifth, Thirty-Sixth, Forty-First and Fifty-Eighth Combined Arms Armies; XXII Corps and elements of the Airborne Forces – not to mention the Black Sea Fleet and its marines. These formations appear to have committed a total of two full combined arms divisions and two air assault divisions; plus 12 combined arms and specialist brigades and three air assault brigades. This makes an approximate total of 150,000 personnel. If logistic units, artillery and missile troops and engineers are added, the generally quoted figure of 190,000 looks about right.

However, Russian armies, like their Soviet predecessors, operate a system of echelons during offensive operations – waves if you like. When the first wave has culminated, or run out of steam, or taken heavy casualties, an echelon change takes place with the second passing through and taking up the battle. What we see currently in Ukraine is the first operational echelon. What and where, then, is the second? This is probably composed of the bulk of what is left of the armies listed above which are still in Russia and likely to be on reduced notice to move. The most important of these are the First and Twentieth Armies, containing many of the best of Russia’s army and its most modern equipment. One report stated that First GTA had been destroyed by the Ukrainians – not likely given that only reconnaissance brigade and two regiments have been reported in Ukraine. The rest of the army is probably around Voronezh. Twentieth is likely to be east of Kharkov.

So, what are the Russians’ options for the employment of the next echelon – and behind that, a second strategic echelon? The first possibility is to complete the conquest of Ukraine either in whole or part. The Donbas, the Sea of Azov and the Black Sea coasts linking Russia to the Crimea will be absorbed into Russia as autonomous republics; what of the rest? Perhaps the aim is to split Ukraine along the line of the Dnieper River, a natural frontier. The territory east of the river will be subject to ethnic cleansing, which is already in progress, which will reduce the need for a long and costly counter-insurgency campaign. That would leave a rump Ukraine west of the river, with no industrial capacity and no ports. But this does not sit with Putin’s assertions that Ukraine is Russia – so the territory west of the Dnieper might also be occupied, again ethnically cleansed, and, with much of the Ukrainian population gone, kept down with a smaller force than would otherwise be needed and which would not require the call-up of large numbers of reservists.

This could be achieved by a switch of main effort from the Kiev area to the south, combined with a diversion, or deception. Maskirovka is a well-established Soviet and Russian doctrinal tool. So, while we are all focused on the situation around Kiev and the fabled 40-mile-long stationary convoy (there, possibly, simply to draw the eye), airborne formations co-operating with the Black Sea fleet envelop Odessa and then, moving through the Russian occupied Transnistria region of Moldova east of the Dniester River, seize the rest of that country. In spite of casualties, the Russians have plenty of airborne and air assault formations and the aircraft to lift them, the men who only recently intervened decisively in Kazakhstan. Once in control of Moldova – another non-Nato state – the Russians will have carried out a successful strategic envelopment of Kiev and be positioned to be able to move into western Ukraine from the south.

It is also worth noting how the Russians use information operations for propaganda purposes. For them, the manipulation of facts and truth is as much a weapon as tanks and aircraft – they coined the phrase agitprop, after all. Anyone who served in the former Jugoslavia would recognise this at once. The idea of fixing not just military, but also media, attention around Kiev whilst pushing hard elsewhere would be axiomatic to Russian, as to Soviet, strategic planning. Let us not forget that the Ukrainians, trained in the same school, will be doing the same.

This situation would represent a Russian victory, albeit at major economic and political costs. Putin’s second option might follow such a victory and would reverse the narrative of the past 30 years, of Nato pushing eastwards towards Russia. This narrative has without doubt been seen in Moscow as a series of insults and provocations by the West: the incorporation of the Baltic States, Romania, Bulgaria, Czechoslovakia, Hungary and Poland into the EU and Nato; the intervention in the Balkans on behalf of Muslims and against Russia’s historic clients the Serbs; the EU’s cynical underwriting of the coup that ousted Yanukovych, in the teeth of its undertakings, in 2014; Nato ships in the Black Sea; US support for the construction of the Ukrainian Navy’s new base at Ochakiv; bilateral arms supplies to Ukraine by Nato members, most recently the suggestion of aircraft from Poland, and so on. To reverse this narrative, a Russian victory in Ukraine and the seizure of Moldova – a remnant of the Soviet empire separated by the chance of history from Mother Russia – would push Russia closer to western Europe. This would also serve as a warning to unaligned nations not to think about EU or Nato membership.

A third option might be for Putin’s best formations to move somewhere else: to establish another land corridor, perhaps – this time with the enclave of Kaliningrad on the Baltic? Such a move might be instead of, or as well as, any other options. Of course, this requires the violation of Nato territory and the inevitable invocation of Article 5. Putin clearly does not fear Nato in the short term, but in the long term, Russia cannot withstand American military power combined with the crushing weight of western sanctions as well as its economic and financial resources.

The use of nuclear weapons can be discounted. They are far too inflexible and bring with them the likelihood of massive retaliation. Russia is outgunned by a ratio of at least three to one in nuclear terms, and no Russian leader will risk the destruction of the sacred narod. What we shouldnot discount, however, is chemical and even biological weapons: these have already been used in Syria and certainly form part of the weapon load of both tactical and operational level weapons systems.

Of course, the Russians may be failing in Ukraine and not have the ability to deploy more forces. Failure would come at a high price for Putin personally – Nikita Khrushchev did not long survive the humiliation of the Cuban missile crisis. It would also without doubt cause non-aligned nations to move more swiftly towards Nato membership and pushing Russia further into isolation and enmity. There is, therefore, no outcome that looks good.

ByLieutenant-General Jonathon Riley   Original Article can be found at
https://www.conservativewoman.co.uk/where-is-the-rest-of-russias-army/