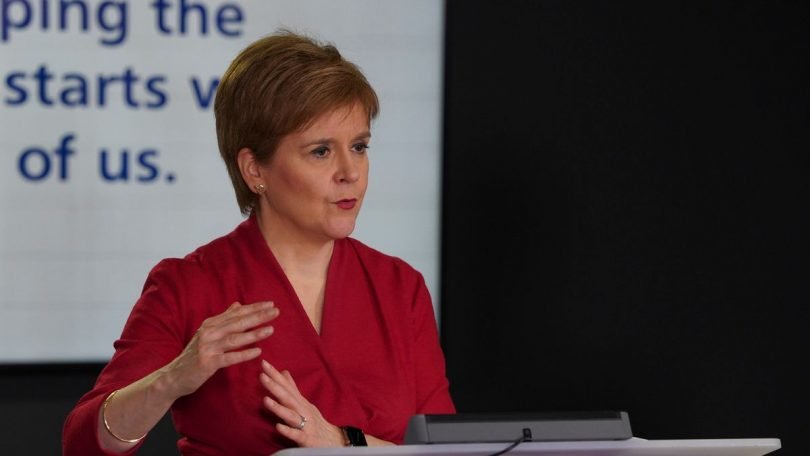 Kevin Hague, argues that support for independence in Scotland is wide but shallow. Much that is believed in Scotland about Scotland’s financial viability is factually wrong. What is needed now is to repair Scots’ feelings on being valued within the UK.

In a piece first published by The Herald, Kevin Hague reflects on what These Islands learned from focus groups with “indy-curious” voters.

As Nicola Sturgeon prepares for the SNP party conference this weekend, apparently cruising towards another Holyrood victory in May 2021 and with opinion polls suggesting support for independence has never been higher, it would be tempting to conclude that she leads a party and a movement with unstoppable momentum.

That would be a mistake. Focus groups carried out by These Islands show that support for independence depends on a near-blind faith in Nicola Sturgeon and on voters remaining uninformed about simple facts. It is support built on sand.

Roughly 20 per cent of that support comes from Scots who have switched to favouring independence having voted No in 2014 and Remain in 2016.

Our focus groups targeted these voters, with the aim of understanding their motivations for switching and how their minds might be changed.

These groups tend to describe their choice as a binary one – it’s either Boris’s Brexit or Nicola’s Independence.

Given they perceive Boris Johnson to be a bumbling embarrassment who has no respect for Scotland, leading a Conservative Party in Westminster who “couldn’t give a damn about Scotland”, it’s hardly surprising that they feel drawn to Nicola Sturgeon.

She shines in comparison. No doubt aided by her daily coronavirus briefings on the BBC, Sturgeon is admired as a clear and concise communicator who these voters respect: “I wouldn’t be ashamed of my country if Nicola was in charge”.

But it’s only seen as a binary choice because the Labour Party is missing in action.

Several people in our focus groups suggested that they viewed Keir Starmer in a positive light and that “if Keir was pro-Union” that could change their view on independence.

Some might argue that Starmer has already adopted an unequivocally pro-Union stance, but these focus group participants were evidently unaware of it.

When the Labour Party created the welfare state, it was a tangible realisation of the value in the bonds of a common citizenship.

By standing up for those core Labour values of unity and solidarity today, Starmer can set out his stall as somebody implacably opposed to separatism. It’s clear that this would be a game-changer for many in our focus groups, but it could also become a defining feature of Starmer’s UK Labour Party: understanding Scotland, respecting devolution and uniting the four nations of the UK.

But the biggest threat to Sturgeon’s hegemony is not a resurgent, Union- defending Labour Party – it is economic reality.

Our focus groups were asked to think about the value of the UK as a sharing Union, which smooths out economic ups and downs and deploys resources where they are needed most.

There was scepticism towards the idea that this sharing actually takes place and in many cases the idea that Scotland might currently benefit from higher public spending as a result was rejected outright.

When presented with the simple facts – data provided by the Scottish Government which shows that Scotland currently “gets back more” in spending than it generates in taxes – the participants’ reactions were surprising. We might have expected them to accept the veracity of the data but shrug their shoulders, but that is not what happened.

Very consistently they simply refused to believe that the numbers could be true. It became clear that they could not reconcile their support for independence with the fiscal truth. “If this was true, surely nobody would support independence” said one independence supporter.

We were treated to a fact-denier’s greatest hits: “the oil revenues aren’t included”, “the figures are manipulated”, “lots of revenue is missing” and so forth.

Suffice to say the objections to the figures were misplaced – the Scottish Government economists who compile the data don’t miss stuff out or manipulate the figures to make Scotland look bad. Why would they?

When the fact-denying myths were dispelled, the last two lines of defence consistently offered were absolute trust in Nicola Sturgeon herself – “if Sturgeon knows these figures, she must have a plan” – and variations on a theme of “England would get rid of us if that were true”. If support for independence is built on fact-denial and blind faith in Nicola Sturgeon, it’s built on sand.

Politicians come and go and their popularity waxes and wanes, but separation would be forever. What would happen to support for independence were Sturgeon no longer First Minister? What if, through becoming better informed, these voters decided their faith had been misplaced? Sturgeon would do well to remember the old adage that trust is hard-earned and easily lost.

It’s not Project Fear, its Project Fact – and when Sturgeon tries to gloss over these issues, she sounds like nothing so much as a Brexiteer.

But while a resurgent, unabashedly pro-Union Labour Party and a more well-informed electorate would damage support for independence, when our focus group participants asked “then why are they so determined to keep us?” they were expressing a fundamental, deep- rooted concern: Scots need to believe that they are valued as part of the UK. It’s about pride, self-esteem and self- respect, but right now these Scots feel unloved, disrespected and condescended to by Westminster.

When did you last hear a Westminster politician of any party articulate why Scotland matters to the United Kingdom, why Britain would be immeasurably diminished were Scotland to leave?

Politicians outside Scotland who would defend the Union need to find their voices and articulate why Scotland matters to them – and Scots need to hear it. The party political landscape may change, faith in Sturgeon could falter and facts might start to bite, but it will all count for nothing unless Scots feel valued because, above all, and in the words of one our focus group participants: “It’s how they make us feel”.

The report on These Islands’ focus groups can be read here.

This article first appeared in the Herald newspaper in Scotland and on the ‘These Islands’ website. IT is reproduced here with the kind permission of these islands. Kevin Hague is a successful businessman and chairman of These Islands

Kevin has co-founded, invested in and acted as an executive Director of two successful Scottish businesses employing over 200 people (M8 Group Ltd and Endura Ltd) and has held various non-executive Director and corporate advisory positions. He now acts as Chairman of These Islands, is a non-executive Director of Lothian Broadband and is a Trustee of the Gifford Community Land Company. Kevin has gained a reputation for robust analysis of Scotland’s economy through his “Chokkablog” blog and often appears in the Scottish media commentating on politics and economics. He was previously Partner and Finance Director at OC&C Strategy Consultants.

Kevin has co-founded, invested in and acted as an executive Director of two successful Scottish businesses employing over 200 people (M8 Group Ltd and Endura Ltd) and has held various non-executive Director and corporate advisory positions. He now acts as Chairman of These Islands, is a non-executive Director of Lothian Broadband and is a Trustee of the Gifford Community Land Company. Kevin has gained a reputation for robust analysis of Scotland’s economy through his “Chokkablog” blog and often appears in the Scottish media commentating on politics and economics. He was previously Partner and Finance Director at OC&C Strategy Consultants.