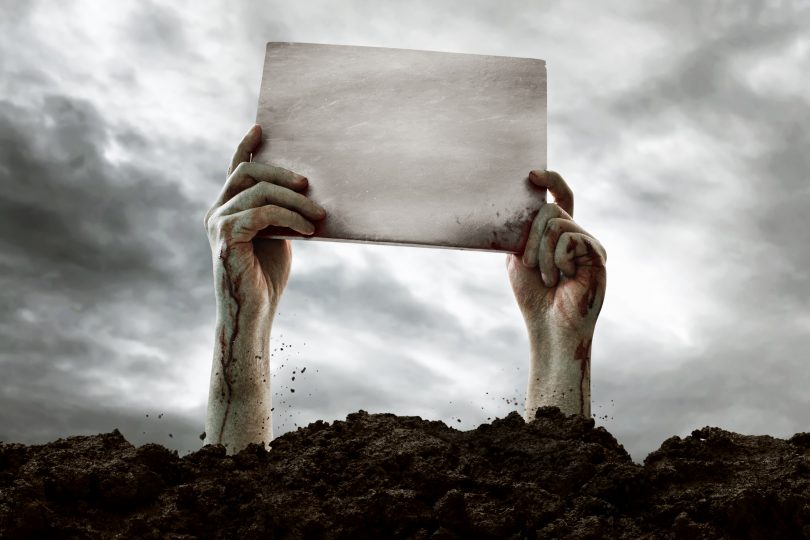 They don’t give up! Having tried and failed to force an ‘extension’ to the transition period, Remainers are now trying to raise obstacles to our trade negotiations with other partners. Beware ‘chlorinated chicken’ and other agricultural scare stories.

When the Covid virus knocked the world for six, Brexit faded into the background. The bad-tempered arguments were forgotten. We joined neighbourhood groups, clapped the NHS, smiled at strangers as we gave them a wide berth, and invented new and ingenious ways of keeping in touch. As the Queen movingly put it, ‘our streets are not empty; they are filled with the love and the care that we have for each other.’
But now the Brexit zombie is back. The Remainer Undead are stirring up controversy. They thought they had struck gold with the campaign against Dominic Cummings, started off by the Guardian and the Mirror. They even thoughtfully provided some of the ‘crowd’ outside the Cummings’s house.

Media articles simultaneously appeared urging an extension to the present ‘transition period’ during which we are half in and half out of the EU. Then a report commissioned by the Remainer organization Best for Britain was published. Not surprisingly, it too urged an extension. It rehashed the long discredited ‘Project Fear’ prophecies of economic doom, and used the Covid crisis as an extra argument. Meanwhile, Michel Barnier, the EU’s chief negotiator, suggested extending the transition period by ‘one or two years’. In a clear attempt to worry Tory MPs, Remainers proclaimed that without a deal with the EU, the economy of ‘red wall’ seats in the North and Midlands, won by the Conservatives from Labour last December, would be hardest hit. Unfortunately for them, recent polling shows that the voters there want to get Brexit done, just as they did last December.

They are right. Extending ‘transition, means keeping Britain under the sway of EU regulations, continuing to extract from our Exchequer payments into the EU budget (and perhaps adding a lot more to help pay for the damage done to the Eurozone by the Covid crisis), keeping all businesses in a state of uncertainty, and putting the break on our negotiations for trade agreements with other countries.

It was such an absurd idea that it pretty quickly crashed and burned, and even Michel Barnier and the EU publicly started to accept that there would be no extension, and that there would have to be some compromise (of course, on their terms) over fishing rights and the notorious ‘level playing field’. Britain has already said that it is not planning on an unfair ‘race to the bottom’ in its social and environmental policies, and has pointed out that in several areas its standards are higher than on the Continent.

But as soon as it seemed that the penny had dropped in Brussels, and that serious negotiations would take place, the Remainers at home changed their tactics. Now it was not ‘extension’ they were asking for. Instead, they seemed to be trying to throw a spanner into the works of our negotiations with other trading partners.

They started to pull out the familiar scare stories about ‘chlorinated chickens’ and the supposed lower welfare standards of animal husbandry in the USA. This is certainly an important topic and one that appeals to the British public: we like to think that the food we eat is both healthy and humanely reared. But these concerns are being exploited as propaganda. If this worries you, please read the detailed research by Catherine McBride on this website. Decide whether the concerns raised by Remainers are genuine, or if they are just propaganda. She shows clearly that the way livestock is raised in Britain and on the Continent is no different from that in the USA. In the case of pork, most of what we eat is imported from Denmark and Eastern Europe, from the same ‘factory farms’ as are said to be the norm in the USA. The same propaganda is now appearing about beef cattle. Yet the evidence shows—and indeed any of us who have travelled in Australia or the USA will have seen—that cattle are more likely to be reared eating grass on open ranges there than is the case in crowded Europe.

Why is this issue now being raised? Is it just a coincidence? I don’t believe conspiracy theories on principle—they are nearly always fantasies. Yet there is clearly a campaign in progress. We can guess what is behind it. Remember that for years the Remainers claimed that we would not be able to sign trade deals with other countries. David Cameron even persuaded President Obama to put us ‘at the back of the queue’. But now, those trade negotiations—with Japan, Australia, New Zealand, the USA—are going well, and quickly. Once they are signed, we shall be visibly much less dependent on the EU, and the EU will have fewer levers to force the British government to negotiate on EU terms.
But if public opinion in Britain can be persuaded to oppose free trade agreements, especially with the USA, all these negotiations would be made much more difficult, and at least delayed. Can it be doubted that this serves the interests of the EU? The mystery is why anybody in the UK should want to go along with it.

The Remainer Undead are back. The only sense I can make of their latest campaign is that they hope that if, by whatever means, we can be kept as tightly linked as possible for as long as possible to the EU, and prevented from drawing closer to other economic partners, one day we might—just might!—decide to go back to Brussels and ask, very humbly, if they would let us rejoin. This the Labour Party (as far as its views can be ascertained) appears to endorse.

The Covid crisis, far from being a cause of delay, provides an opportunity to move on. Why? Because the probable rise in unemployment means we can and should end free movement. Because the damage done by the crisis means that the British government can and should borrow to sustain damaged regions and industries without being hampered by EU controls. Because we need to distance ourselves as best we can from the financial risks besetting the Eurozone. And finally because when the damaged world economy is restructured in the wake of Covid, we need to have the freedom to seek the best opportunities worldwide. If the EU wants an equitable Free Trade Agreement with us, fine. If it refuses, we shall trade with it on ordinary World Trade Organization terms. In either case, ‘Global Britain’ needs to secure agreements with more willing partners.

A version of this article originally appeared in the Daily Mail